Now that we have Eleventy up and running with a “Hello, world” example, let’s add some HTML and Nunjucks.

A one liner in a markdown file isn’t all that useful, so let’s get some HTML on the page. We’re going to use Nunjucks to do this.

Nunjucks is a templating language that’s powered by JavaScript. It’s a way of extending HTML that lets us add logic, loops and various other capabilities.

These allow our templates to be dynamic, even though at the end, they’ll generate static HTML. It’s sort of like Sass, but for HTML rather than CSS.

You can also use Nunjucks in the browser as a client-side templating language. It’s very powerful, as we’ll come to learn throughout the course.

Getting started with Nunjucks permalink

Eleventy already has Nunjucks built in, and if we were to use a .njk file, it would automatically use Nunjucks to process it. That’s super smart but, ideally, we want to be using good ol’ HTML pages.

Luckily, Eleventy has us covered for that. All we need to do is update our Eleventy config file.

Open up eleventy-from-scratch/.eleventy.js in your text editor.

Add the following 3 lines, straight after the return { statement:

That whole block in your .eleventy.js file should now look like this:

With the code we’ve just added, we’re telling Eleventy that markdown files, data files and HTML files should be processed by Nunjucks. That means that we can now use .html files instead of having to use .njk files.

Now that’s set up, we’re ready to create some templates. Let’s start by making some folders for them to live in.

In your terminal, make sure you’re in the eleventy-from-scratch folder, and run the following command:

This creates our _includes and layouts subfolders.

Inside eleventy-from-scratch/src/_includes/layouts, add a new file called base.html and open it up.

Paste in the following HTML:

This is our base template. All future templates will extend this template—more on that in just a minute.

But first let’s zoom in on two areas of interest in this snippet:

Now that we’ve set up our base template, let’s add a template for our home page.

Inside eleventy-from-scratch/src/_includes/layouts add a new file called home.html and add the following HTML to it:

The first thing this does is tell our home template to extend the base.html template that we added earlier. Eleventy automatically looks for includes like these templates from the _includes directory, which is why we only need to specify layouts/base.html.

After this comes the {% block %} which we discussed earlier.

Inside the {% block %}, we’ve added an article which contains the title, followed by {{ content | safe }}. This will render the markdown content, which for us currently, is “Hello, world”.

Because it’s markdown, it will be now converted to HTML and this is where safe kicks in.

This is what’s called a filter—a JavaScript function that can be applied to variables (in this case, content).

We have something called autoescaping turned on here, which protects us against cross-site scripting.

Without the safe filter, the HTML would be automatically escaped to keep our site safe.

Adding the safe filter to our content marks it as safe and allows it to render on the page.

Assigning our template to our page permalink

Right, that was a lot to take in wasn’t it? Let’s reward that hard work with some output!

Open up, eleventy-from-scratch/src/index.md and delete everything in it. Then add the following:

Hopefully this is starting to come together.

If you weren’t running it already, run npm start in your terminal. When you open http://localhost:8080 now, you should see this: 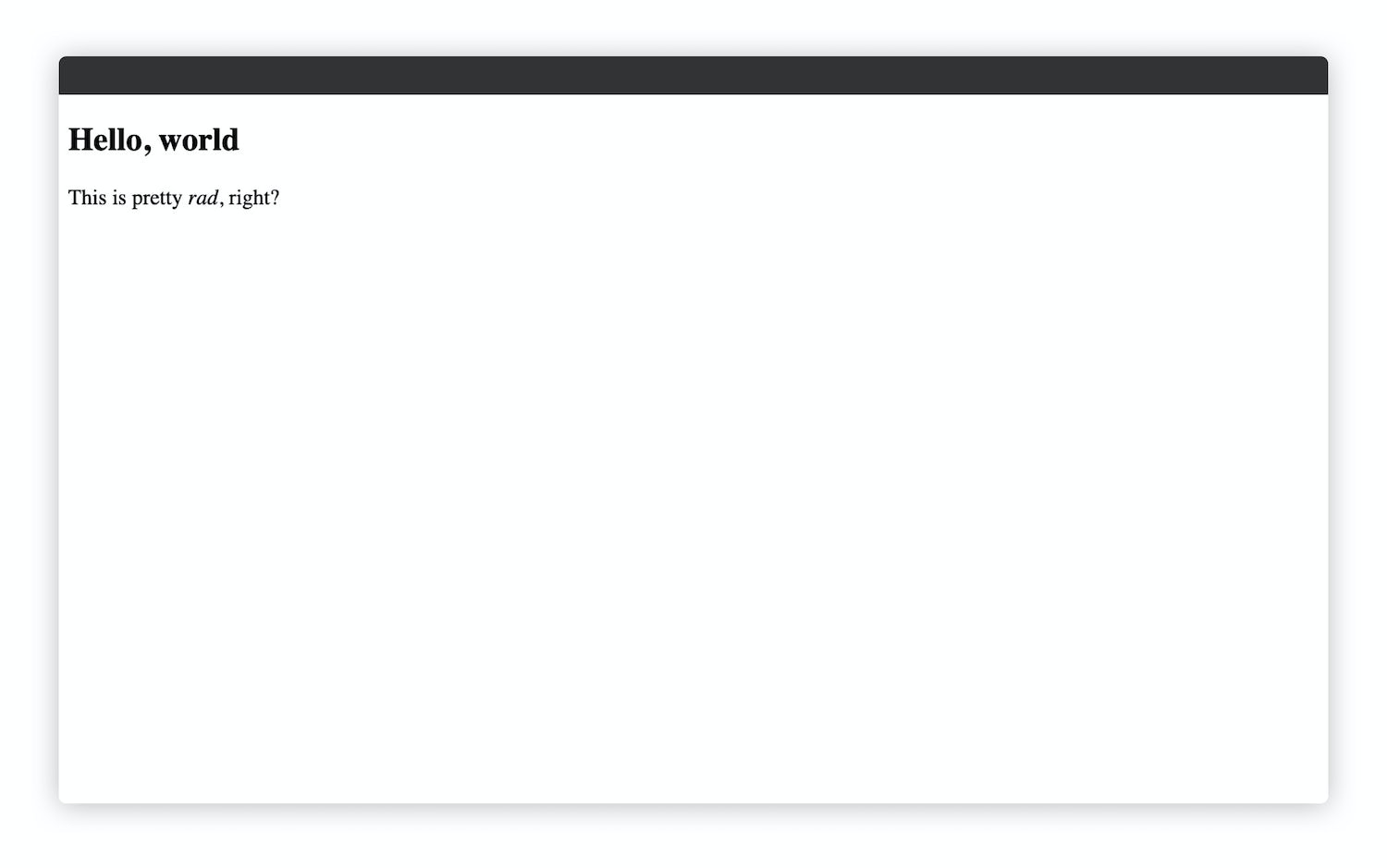 We’ve got ourselves a base layout, a home layout, and we’ve been introduced to Nunjucks, Nunjucks filters and Nunjucks blocks.

This is all helping us render out some HTML. Nice work!

Next up, let’s dig in to some Front Matter.

Enjoying this content? It’d be really appreciated if you support me on Ko-Fi by buying me a coffee.

Next up: Lesson 4 - Front matter basics

Learn about what Front Matter is, why it’s useful and how we can use it to super-charge our site’s content.

Help! My version of this lesson isn’t working.

Don’t panic, you can download the working project here! Once they are downloaded: replace your project with these files and run npm install. You can read more information here.

I am currently setting up a new creative agency called Set Creative Studio and we are taking on projects for 2022, so if you have a project in mind, get in touch.