Lesson 28 - Styling the about page

We’re almost there with this front-end now. Let’s do some quickfire styling of our about page.

Like the summary says, let’s make this one snappy. We’re nearly at the end of this course now and I bet you’re getting pretty tired, so it’s time for a quick win.

The about page is actually pretty much ready to go. All we need to add is styles for the team members. The first part of that is the auto grid that lays out those people items.

I love this upcoming utility and wrote a pretty detailed tutorial about it here on this site.

If you don’t have time to read the tutorial, I’ll give you a quick TL;DR.

We use the power of minmax and auto-fill to distribute items by filling as much of the viewport as we can. This creates a really handy, fully responsive grid. All of that in 6 lines of code!

Let’s add that to our critical CSS. Open up eleventy-from-scratch/src/scss/critical.scss and on line 94, add the following, with the other utilities @import statements:

Now we have that, we’re going to create a compositional block that affects the auto-grid.

Create a new file in your blocks folder called _people.scss and add the following to it:

This is CUBE CSS in a nutshell. We have a utility that does one job and does it well, and a compositional block creates some context for it.

Let’s add that to our critical CSS. Open up eleventy-from-scratch/src/scss/critical.scss and on line 83, add the following, with the other block @import statements:

We’ve got our people laid out now, so let’s make them look good. Create a new file in your blocks folder called _person.scss and add the following to it:

What we're doing here is creating an overlay that sits on top of each person’s profile shot. Then, because we're forcing the image to fill 100% of the parent height as some images are taller than others, we use object-fit: cover again to fix the cropping. We make it black and white using the grayscale filter for good measure too.

Let’s add that to our critical CSS. Open up eleventy-from-scratch/src/scss/critical.scss and on line 84, add the following, with the other block @import statements: 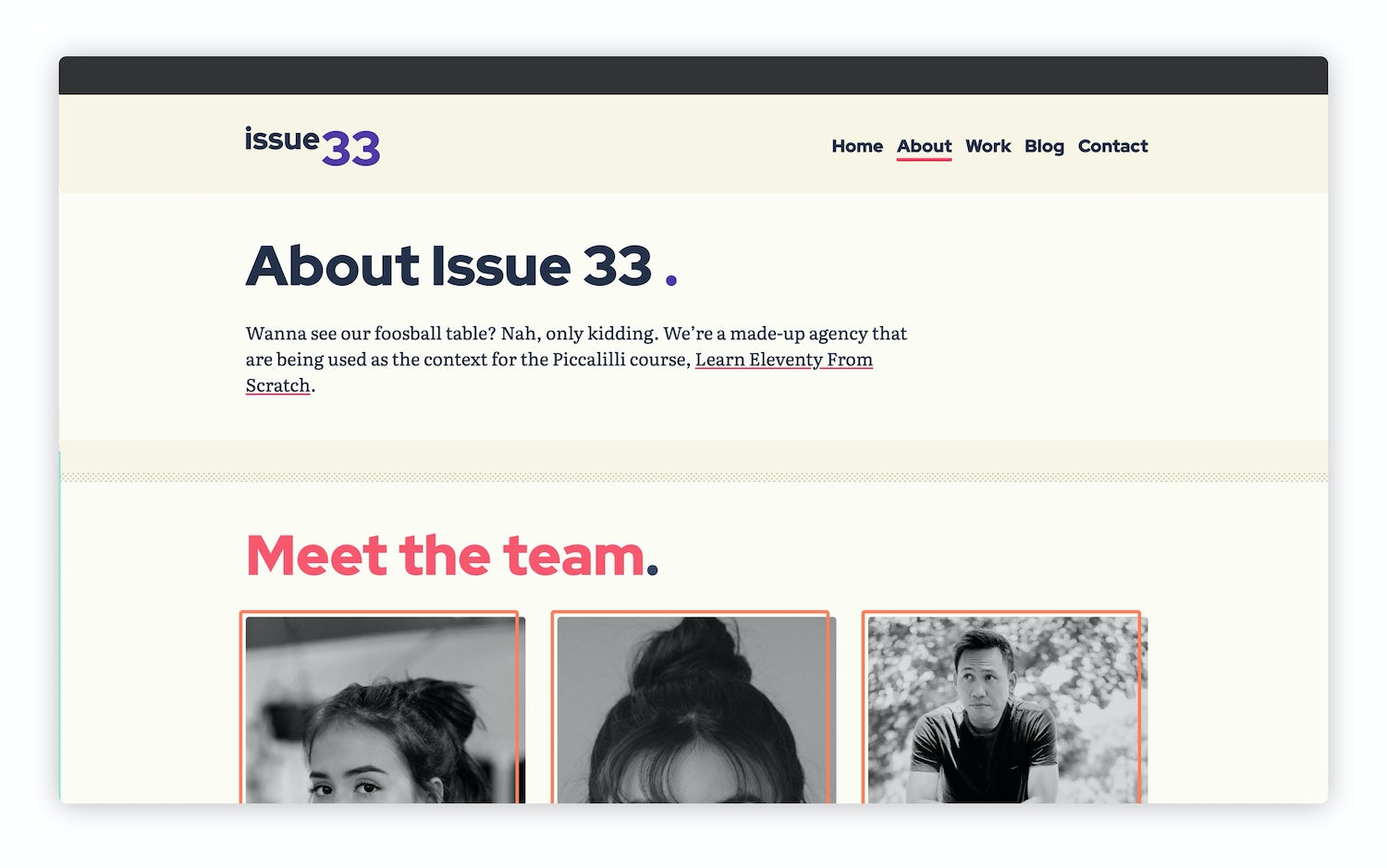 That was a quick one wasn’t it? Let’s move straight on to another quick one by adding ourselves a basic contact page.

Enjoying this content? It’d be really appreciated if you support me on Ko-Fi by buying me a coffee.

We’ve got most our front-end now, so let’s see how flexible it is by quickly adding our contact page.

Help! My version of this lesson isn’t working.

Don’t panic, you can download the working project here! Once they are downloaded: replace your project with these files and run npm install. You can read more information here.

I am currently setting up a new creative agency called Set Creative Studio and we are taking on projects for 2022, so if you have a project in mind, get in touch.